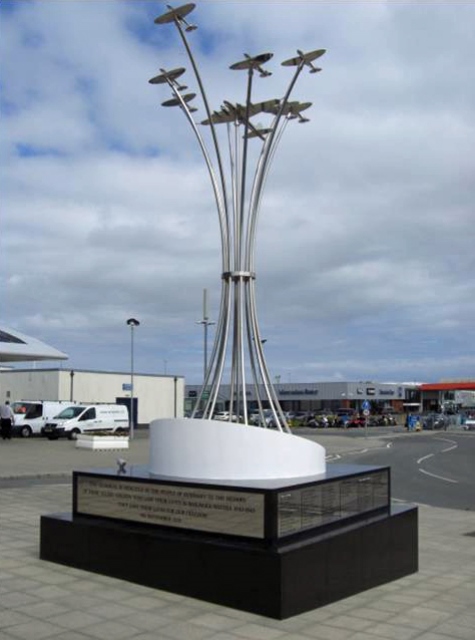 Granite Le Pelley was pleased to supply and install the granite for the memorial which marked the 70th anniversary of the Liberation and a part of the air war in Europe. The memorial, designed, funded and constructed in Guernsey over the last three years, is a stunning piece of modern art depicting a US B17 Bomber being escorted by 8 Spitfires.

On the 9th September the memorial was dedicated to 153 airmen of the Allied Nations who died around the Bailiwick. The aircrew remembered came from six different nations including the USA, the RAF, the Commonwealth and occupied nations of Europe and died as a part of an international effort which ultimately achieved the Liberation of the Channel Islands.

Military attachés of the 6 nations along with senior RAF officers, the Bailiff of Guernsey, Floral Guernsey & the people of Guernsey attended the dedication ceremony at Guernsey airport. A Douglass C47 carried out a flypast at 1100 to mark the end of the main ceremony.

It is 6 metres in height and has the names of the casualties around the base which is made of polished Zimbabwe black granite cladding.