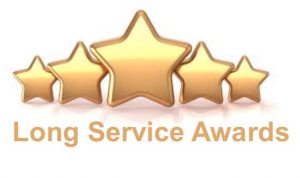 Julie Green celebrated 20 years with Granite Le Pelley in February, she originally started with her time split between Garenne and Granite Le Pelley but after six months moved to Granite Le Pelley full time. Starting as secretary/admin, Julie is now Office Manager and an integral member of the team, she handles accounts, housing licences, training schedules, monitoring costs on projects and keeping the team under control.

Richard Breban celebrated 25 years on the 23rd of March although he has actually worked a total of 31 years for Granite Le Pelley having originally joined the company in November 1983, less than a year after Mick Le Pelley formed the company in December 1982.  Richard is proud to have been involved with the company since the early days of the business and remembers fondly the early days, particularly the first Christmas party which was held at the Rockmount public bar and consisted of a considerable number of beers and a couple of trays of sandwiches.

The business has come a long way with Richard now being MD but he enjoys seeing many of the projects around the Island that he, along with half a dozen stonemasons, a labourer and a driver worked on in the early days.  Richard explains how difficult things used to be, “The guys don’t believe me when I show them some of the pieces we put in buildings with a stack of blocks, a couple of drums, rollers and brute force.  The best thing to happen since I started is getting a Hiab that is fantastic for lifting in lintels/large stones etc - it really makes life so much easier.”

There have been many changes in the business and Richard remembers with fondness the great characters he worked with, “Sadly the two people responsible for me getting into stonework, Mick Le Pelley and Joe Byrne are no longer with us but we certainly had a good deal of fun over the years!  One of the funniest memories is when we were working on a private house and one of the young lads was fascinated with the size of a bra on the washing line.  He was encouraged to hold it and was caught red handed by the wife who walked around the corner as he was fondling it - not something that would even be considered nowadays.”  And the worst change Richard explains is, “Mobile phones... not because you are contactable all the time but because the guys spend so much time on them when they should be working!”